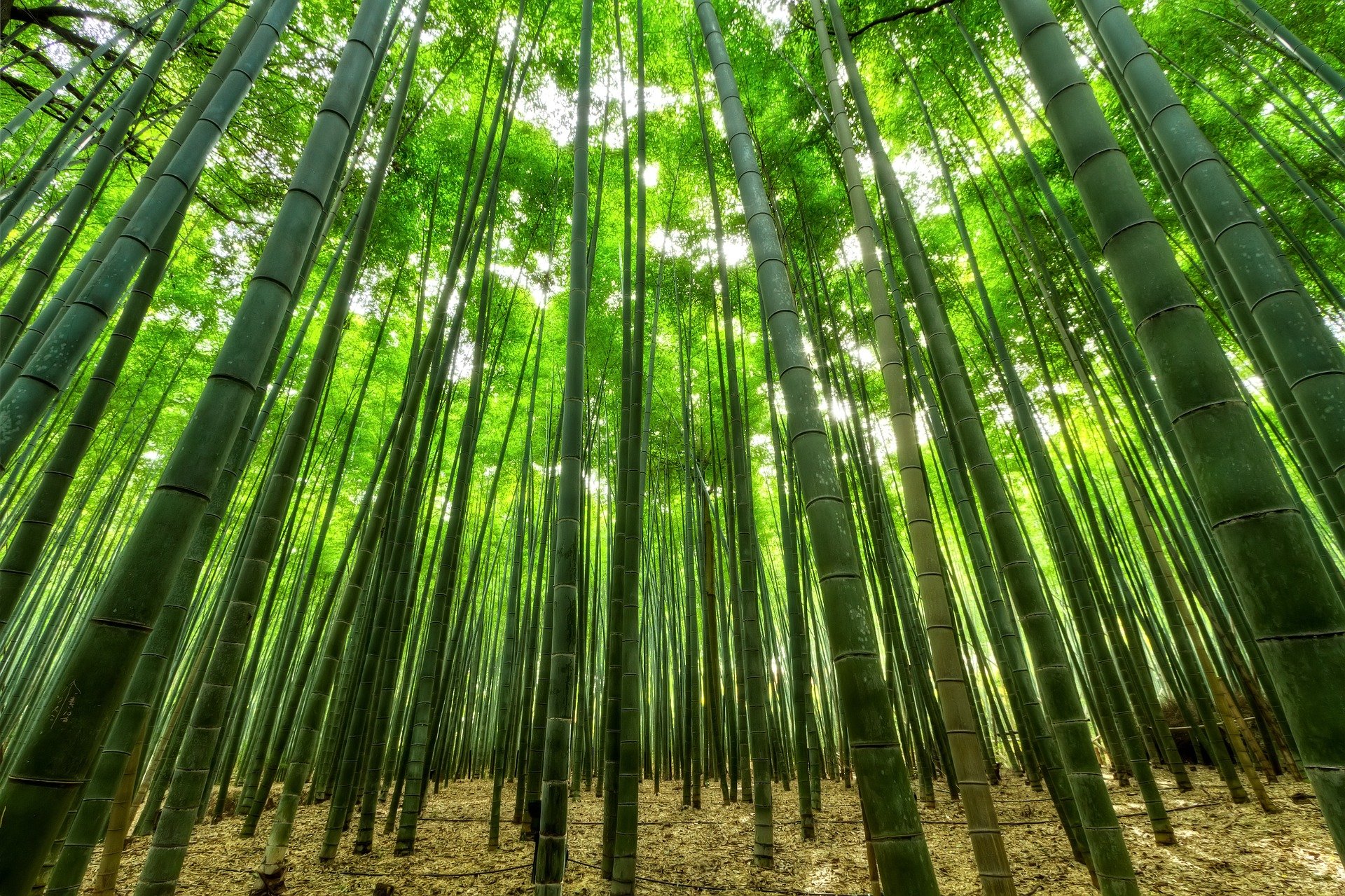 The Bamboos are a group of plants of the family of the Graminaceae, subfamily of the Bambusoideae and the same of the corn, the wheat and the rice and that counts about 1400 species and 100 genera; they are long “woody” grasses, with the highest rate of growth in the world, In some cases, they grow even 60 cm per day and adapt also to temperate and cold climates. In fact, the bamboo forests in the world extend from the tropics to the more temperate regions such as: China, Japan, the Himalayas, Europe, Latin America, Africa, and the Far East.

Their height can vary from a few centimeters up to 40 meters and the diameter can reach 30 cm. Varied and wide is also the range of shapes and colors: you can meet bamboo yellow, black, striped, climbing and even thorny. The genus Phyllostachys is by far the most diffused and known in Italy, frequently is confused with the Arundo donax, present on the whole peninsula along ripe and escarpments.

The term Bamboo originates from the Malai language “Mambu” and was then translated into English with the most famous name of Bamboo; its introduction in Italy is attributed to Prof. Orazio Fenzi, a Tuscan botanist in 1884.

Thanks to its remarkable and perennial foliar surface it is able to absorb high amounts of carbon dioxide; with its roots bamboo transforms air and soil pollution into biomass; is resistant to the attack of usual diseases for other grasses and therefore does not need special care and attention; bamboo plants are considered an excellent economic and eco-sustainable strategy for the management of organic animal waste, as they are able to keep the waters of rivers and lakes clean; they have an excellent capacity to retain water, thanks to which it prevents the leaching of the soil thus avoiding, in case of heavy rain, dangerous swellings of streams and rivers, the same capacity serves the same plant to withstand any drought periods more or less long; is very resistant to fire, as the green state is hardly fuel is able to regenerate new reeds every year; finally, it is an excellent natural barrier against dust and noise.

To date, the European market has enhanced the ornamental aspect of the plant, focusing more on the aesthetic aspect than on its other equally important characteristics: bamboo is in fact used in the East for the production of wood and food sprouts.

Therefore, besides being a plant with many qualities and advantages for nature, it is to be considered a “superfood” in fact its buds are rich in nutrients from the vitamins of group B to minerals such as manganese, copper, potassium and silica. A cultivated bamboo shoot gives rise to a 20-meter-high cane in a few weeks, and is most used in Asian cuisine.

In addition, the use of bamboo in sustainable construction is also important, it can be used to build entire buildings; it is used to make casings, floors (parquet) and ceilings; the cane is used for pillars, beams, ceilings and as a furnishing object.

The plant, in the initial phase of growth, is suitable for making fabrics and upholstery. In the American market it is widely used to produce sheets, curtains, but also pajamas, bathrobes. It should also be considered the use in diaper inserts, given the antibacterial and natural characteristic of bamboo.

In addition, the core of the plant (called Culmo) is obviously considered the most important part for its multiple uses. In addition to being an excellent fuel for ovens or stoves, especially for the starting phases (bamboo has a very high caloric value), with it you can realize structures of various kinds: parts of buildings, scaffolding for them, mats, various braided articles, musical instruments, furniture. The base of the Culmo, thicker and heavier, is ideal to produce coal.

The soil must be fertile, irrigated and ploughed with constancy. ; the production arrives with the fifth year, but already in the third year it begins to collect some sprouts in the plantations that are better kept through better techniques and fertilizations. What is often underestimated is the cost of labour, as bamboo is not planted and then harvested when it matures like other plant species. So, you must mark every single barrel and wait three to five years for harvesting and the cost of labor is high because you need to examine every single barrel at the harvest stage.

During spring and summer, it is important that the bamboo is watered abundantly a few times a month, during autumn only once and in the coldest months nobody. At the beginning of spring and mid-summer it is also necessary to fertilize the soil with a product very rich in nitrogen; while, during the winter it is essential to prepare a solution with pine needles to protect the roots from moisture.

Once planted, it is only necessary to take care of the cultivation, the cost of planting bamboo is estimated at between 10’000€ and 20’000€, while the price of 1 kg of fresh sprouts is around 15€. Its harvest takes place after the summer. On the other hand, its flowering is very slow, as there are some species of bamboo that bloom only after a hundred years, and many bamboo die after this stage due to the stress that the flowering causes to the flowering of the plant.

The bamboo plant, in eastern countries, is a symbol of longevity. Bamboo leaf extract is used in cosmetics and even in beer. There is almost no limit to what can be achieved with bamboo.

The lavender is a small shrub from the family of the Lamiaceae, native to the Mediterranean region ...