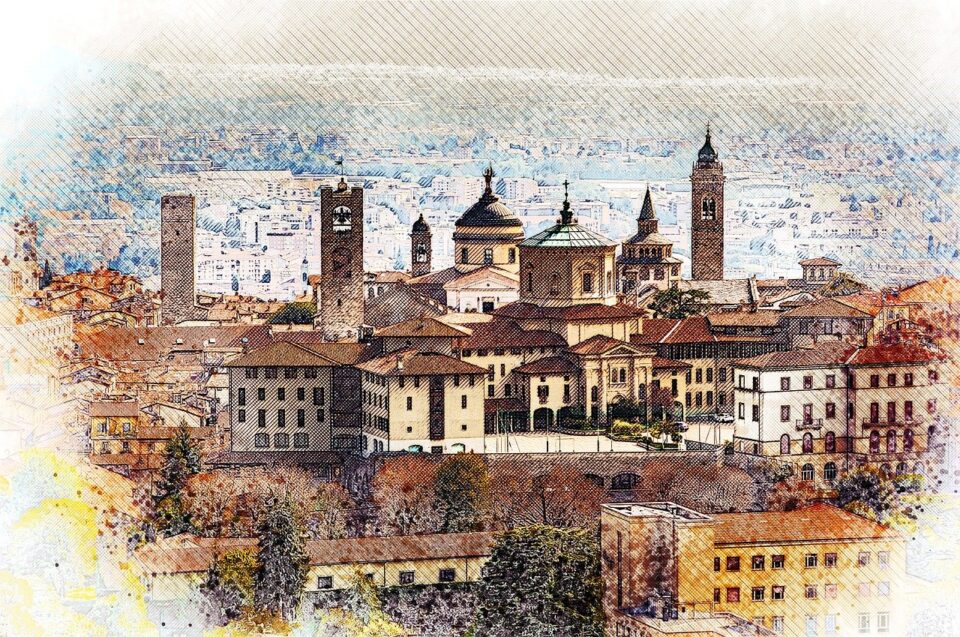 The numbers of deaths in March and April 2020 recorded in the Bergamo area are an unprecedented disaster and may look like an error on the chart because of how high and indecipherable they are. Of particular concern were the outbreaks in Nembro and Alzano. No virologist has yet been able to explain the reason for certain numbers in Val Seriana and Bergamo. In Nembro, in March only, there were 152 deaths, five a day, in a town where there are usually 12 in the whole month. In Alzano 114 versus 10, in Zogno 89 versus 8.2, more than 10 times the established trends.

In the first nine months of 2020, deaths recorded by Bergamo’s municipalities totaled 13,640 against the 7,651 of the 2015-2019 average, month by month: that’s an excess mortality of 5,989 people, all to be ascribed to March and April, when there were respectively 5,179 and 1,024 more deaths than the averages of previous years. On all other months, however, 2020 appears to be a year perfectly in line, if not even below the previous data: in January, for example, deaths were 996 against an average of 1,083, in February 888 against an average of 915. There was, therefore, no impact on deaths before the official discovery about the presence of Covid-19. The only month with a slight increase (again with the exception of March and April) was May, with 813 deaths compared to an average of 797 over the previous five years, but for the rest, in July and August, the trend was even lower than in 2015-2019. With a slight uptick, almost statistically insignificant, in September: 751 deaths compared to 742.

EFFECTS ON THE ECONOMY DUE TO COVID-19

Bergamo is the third city to suffer the most, after Brescia and Verona, due to the Covid-19 effect on the economy in absolute figures and in terms of employment. This was revealed by a study conducted by Cerved for Anci that analyzes the sectors most affected by the epidemic in 93 urban centers. In absolute terms, the biggest losses in turnover will be in Brescia, Verona and Bergamo, which will also suffer major repercussions in terms of employment. It monitors the performance of more than 1600 productive sectors and about 730,000 companies and quantifies the impact of Covid-19 on the productive fabric of the 93 Italian medium-sized cities on the basis of two scenarios: a soft one of gradual and steady recovery of the economy from the second half of 2020 and a hard one of persistence of the emergency situation.

If we consider the turnover lost in the two-year period 2020-2021 compared to the pre-Covid situation, the greatest contraction is recorded in Brescia, with an overall loss of revenues that, depending on the different scenarios, ranges from 16 to 21 billion, driven by the negative performance of steel and metals. In second place in this ranking is Verona (12-16 billion lire lost), where car dealers have the heaviest impact, while in third place is Bergamo (11-15 billion lire), where the drop in construction and car components has the greatest impact. A similar picture is revealed on the employment front, looking at the number and concentration of employees in sectors with a strong Covid-19 impact.

IN 2020 LOST ABOUT 10% OF MANUFACTURING OUTPUT, DESPITE RECOVERY IN THE SECOND HALF OF THE YEAR

In the last three months of 2020, manufacturing production in the province of Bergamo continued to grow, although at a slower pace due to the new worsening of the health situation, after the collapse of the first half of the year and the intense, albeit partial, recovery of the third quarter.

Despite these positive results, in contrast with the national figure where production showed a decline in the fourth quarter, pre-Covid levels have not yet been reached: the change compared to the same period in 2019 is -2.5% for industry and -2.2% for crafts. The average result for 2020 therefore registers a heavy loss for Bergamo’s manufacturing sector, penalizing in this case more the artisan companies (-11.3% in Bergamo, -11.9% in Lombardy), hit hard in the first part of the year, than the industrial ones (-9.2% in Bergamo, -9.8% in Lombardy).

In 2020, all sectors recorded a contraction, particularly accentuated for those in the fashion industry, which recorded losses of over 20%. Mechanics, the most important sector in terms of size, rubber-plastics and the food industry recorded lower-than-average decreases, while the chemical-pharmaceutical industry recorded the smallest losses.

The average annual variation in turnover (-9.2%) is identical to that of production, although the increase recorded in the fourth quarter is in this case more consistent (+3.3% compared to the previous quarter). Even more marked was the growth registered in the last three months of the year in domestic orders (+5.9%) and, above all, in foreign orders (+11.6%), giving hope for a possible strengthening of the recovery at the beginning of 2021.

Entrepreneurs’ expectations show an increase in confidence levels, confirming the improvement seen during the year after the record negative values recorded in the first quarter. For production (+8.5%), foreign demand (+6.5%) and employment (+2.6%), the balances between forecasts of growth and decrease are in positive territory, while pessimistic indications still prevail, albeit to a limited extent, regarding domestic demand (-1.7%).

Chamber of Commerce President Carlo Mazzoleni comments on this situation:

“Analyzing manufacturing as a whole necessarily involves flattening out the differences. Some sectors have performed surprisingly well, given the circumstances, while others are still in a severe crisis. Despite the fact that the province of Bergamo was among the territories hardest hit by the pandemic, its industrial production still had a better annual result than the regional one. Handicrafts showed more negative results, although once again better than at Lombard level. Looking ahead, the growth in orders and confidence levels give us confidence in our ability to recover in this new year. The containment of the epidemic, the vaccination campaign and the ability of the new Draghi government to give direction and rapid concreteness to the Recovery Plan will be decisive.”

The Table for Development and Competitiveness of Bergamo invited Bergamo’s deputies and senators to the Bergamo Chamber of Commerce to present them with the decisions that would make some priority projects of the Bergamo area converge in the track of the National Plan for Recovery and Resilience (PNRR, or Recovery Plan).

There are three selected projects that the Table for Development intended to report to the Ministry of Economy and Finance. Due to their characteristic of strong integration at various levels, they are considered to have considerable potential for innovation and to be strongly representative of the institutional and entrepreneurial plurality typical of the Bergamo community, which, today, is hoping for a sign of attention from the local political world that will be of help to the full recovery of a territory so badly hit.

The first project, illustrated by Mayor Giorgio Gori and Councillor Francesco Valesini, is led by the Municipality of Bergamo and aims at immediately activating deep transformations in the area of the Bergamo railway station with the construction of the new European Station, which will be able to strongly renew and improve the efficiency of the integrated system of public rail transport. The estimated value of the project is 490 million euros, with a request for co-financing of 200 million euros.

The second project, presented by Councillor Franco Cancelli, is led by the Province of Bergamo and aims to promote strong investment in the Bergamo educational system in order to reorganize the higher education system, starting from the creation of a campus closely related to the new intermodal hub. The total cost is expected to be 380 million euros with a required co-financing of 150 million euros.

The third project, illustrated by President Carlo Mazzoleni and Don Cristiano Re, is led by the Chamber of Commerce in synergy with the associative world. It aims to establish a high-frequency rapid bus link between Dalmine and Bergamo, to connect the various university poles, the science and technology parks (POINT and Kilometro Rosso), the Punto Impresa Digitale and the territorial Digital Innovation Hubs, thus promoting the coordination of local excellence and innovative services for companies and employees on the basis of supra-municipal agreements already made. The project envisages costs of 185 million euros, with co-financing of 110 million euros required.

The inclusion of these three projects in the PNRR may also trigger virtuous effects on other strategic initiatives already agreed upon in the context of territorial governance, such as the strengthening of rail connections with the airport and Milan, the development of tramways in the valleys and the increased attractiveness of those territories, the redevelopment in a green key of the main urban systems, the promotion of effective actions for the strengthening of training – in particular, technical training – business innovation and its widespread effects in the territory, the development of coordinated measures of local and corporate welfare.

The project “PsicoAiuti Bergamo. La città in ascolto” proposes to support the people of Bergamo who are facing the pandemic not only as a health emergency, but also as a change in personal and collective habits regarding family life, social relations and work. It is a free and telephone-accessible listening desk for anyone who is in a difficult situation and cannot manage the changes imposed by Covid-19.

INFO ON ECONOMIC, MEDICAL, AND CULTURAL SITUATION SUFFERED BY LOMBARDY IN THE LAST YEAR DUE TO COVID-19

The evolution of demand from companies was similar to the one of production, and exports fell sharply, both to EU countries and to those outside the EU, affected by the contraction in world activity caused by the pandemic. For 2021, investment programs are marked by stability, conditioned by uncertainty, especially regarding the trend of demand.

One of the most immediate economic effects of the crisis associated with Covid-19 has been the blockage of tourist flows, catering, transport, and part of the retail trade; in contrast, non-specialized businesses have recorded an increase in turnover. In services, turnover registered generalized declines, particularly intense in non-food trade, while at sector level the most negative impact concerned the hospitality sector, including accommodation and catering, for which a drop in added value of around 24% is estimated. The foodstuffs and chemical and pharmaceutical sectors posted the smallest losses. The recessionary effects of the pandemic crisis have had a marked impact on the profitability of Lombardy’s businesses.

Bank loans to the production sector returned to expansion, due to the combined effect of the liquidity needs expressed by companies following the restrictions on activities and the strongly expansive orientation of monetary policy and government interventions to support access to credit. Labor market conditions progressively deteriorated and participation declined. Employment declined among the self-employed and among employees with contracts other than permanent contracts. The contraction in employment was significantly less than the decline in activity thanks to the exceptional expansion of recourse to various forms of wage subsidies and the government’s freeze on layoffs.

ISTAT mortality data for 2021 confirm an extremely negative figure in Lombardy, with 28,103 deaths and 499,000 recoveries.

Palazzo Lombardia assumes an expenditure of 1.5 billion euro to spread 5G and broadband throughout the region, 20 million for the digitization of local authorities, 12 million instead intended for the health system in Lombardy and finally 10 million euro will support the digital turnaround of the agricultural sector. 534.5 million euros will be allocated to three macro-projects in the field of green transition, 514 million euros to increase bicycle and pedestrian paths to which is connected the plan of incentives to scrap vehicles and especially plants that produce more pollution. To the reclamation and restoration of lakes Alserio, Annone, Pusiano and Sartirana will be allocated 13 million euros and finally 7.5 million euros is the share planned for energy efficiency measures that will affect 5,000 public buildings, 3,500 sports facilities and 2,400 school facilities.

Urban regeneration includes 800 million euros for building recovery projects in the region and the promotion of Lombardy’s historically significant villages. An expenditure item of 250 million euros is earmarked for the removal of architectural barriers, while 12.7 billion euros of the 35 billion euros available to the Lombardy Region will be allocated to works aimed at upgrading the public transport network at both local and regional level.