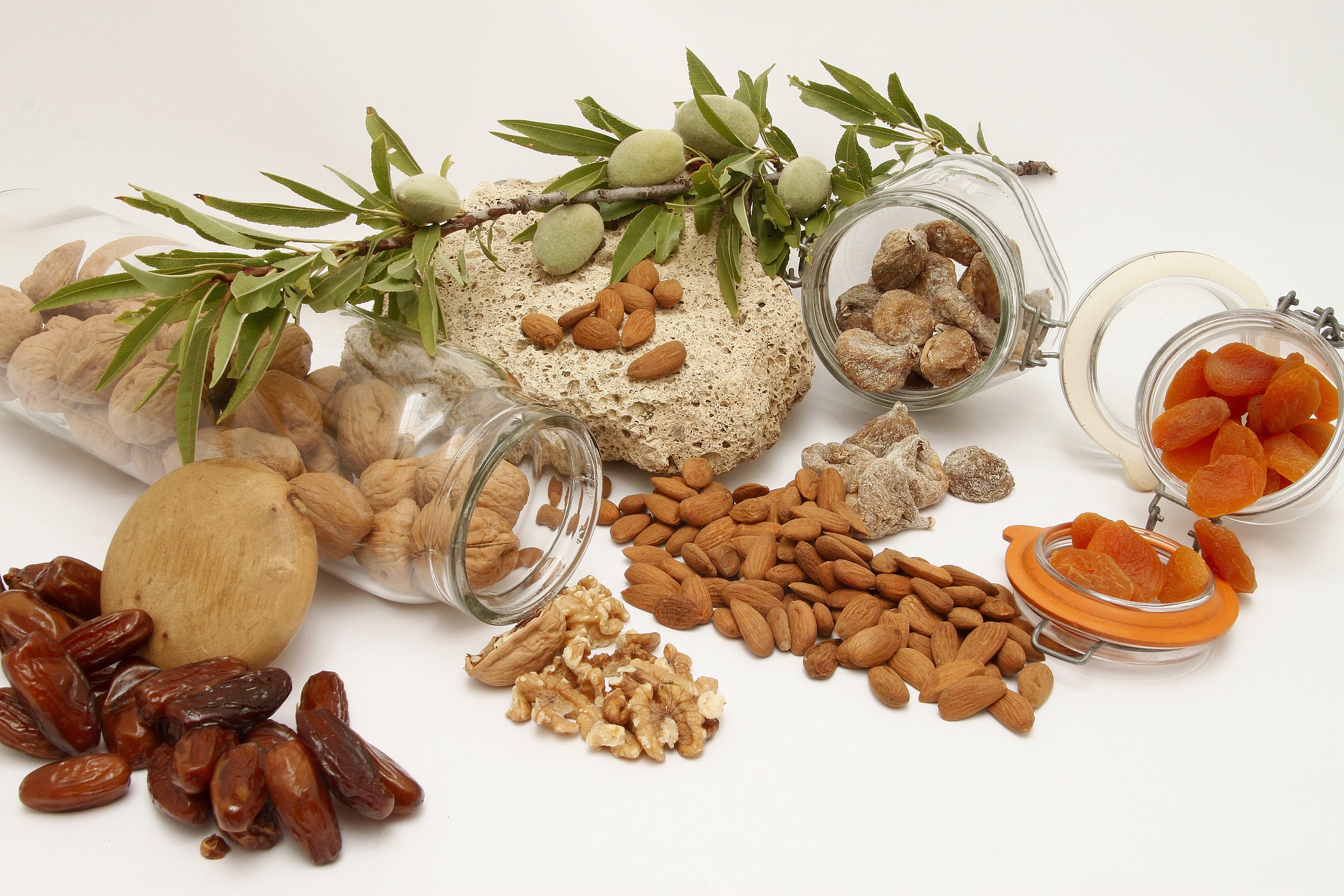 The drying of a certain fruit was widely used by the Romans for the preservation of food; a process still used today in warm countries where the fruit is placed on mats to dry in the sun or are dried in ventilated ovens. A method that has the advantage of preserving the best gustative qualities.

Historically, dried fruit was used for its astringent and intestinal properties. Once they disposed of their seeds, they were attributed benefits on the lungs, kidneys and liver. There are a wide variety of fruits that can be dried, the most common ones: apricots, figs, plums, grapes, dates, apples, but exotic fruits with coconut can also be dried. They mainly come from Mediterranean countries, California, South Africa, Australia, Turkey, Iran, Morocco, Bulgaria. Dried fruit is also available all year round.

In Sweden there is a Christmas tradition related to almonds; in fact, on 24 December a rice cake is prepared with a peeled almond inside, the cake is then cut and served only to girls, it is believed that the one who finds the almond will be the first to marry.

Dried fruit is rich in proteins and lipids, but also in nutraceutical substances such as vitamins and minerals, which is why it is widely used by athletes and wellness lovers. It is therefore composed of carbohydrates, potassium, calcium, magnesium, iron, phosphorus, copper, zinc; the only negative aspect to note is that the long process of dehydration suffered by dried fruit deprives it of very important vitamins such as: vitamin C and A.

It is rich in vitamin E which is a powerful antioxidant that prevents aging and fights free radicals. In addition, the lipid fraction is represented by omega-3, 6 and 9 unsaturated fatty acids, which, in addition to preventing the accumulation of triglycerides in the blood, play an anti-inflammatory action and increase the immune response.

Of all the foods that cause allergic reactions, peanuts and nuts are responsible for most of the more severe cases; the approach used today for these patients, allergic to nuts, is the total elimination of these foods from the diet, The problem is that prevention is complicated as peanuts and other nuts are found in unexpected products or may contaminate other foods during their processing and processing. Therefore, before recommending the use of dried fruit in the usual diet it is necessary to know every food potentially at risk of allergy.

Dried fruit helps to reduce serum cholesterol levels when consumed under controlled dietary conditions and can replace other foods normally present in the daily diet. Characterized by the preventive action that plays against cardiopathies and arteriosclerosis thanks to arginine, an amino acid essential for the functioning of the vascular endothelium. Dried fruit is an excellent ally of those who want to stop smoking, because chewing helps to drive away the desire of the cigarette, but also because it improves blood circulation.

Hazelnut and almond shells are used as natural fuel for stoves and fireplaces; dried fruit helps to tone the skin, stimulates metabolism and has anti-stress and anti-aging properties thanks to the essential fatty acids contained in it. It is therefore a real elixir of long life and beauty, obviously if taken in the right quantities.

The lavender is a small shrub from the family of the Lamiaceae, native to the Mediterranean region ...